Leicester City 1-2 Southampton: Saints get revenge as Ings does it again by Marc Walker
Southampton: Ings hilariously corrects reporter on his season’s goals tally by Marc Walker
Next1 of 4Prev post
Use your ← → (arrows) to browse 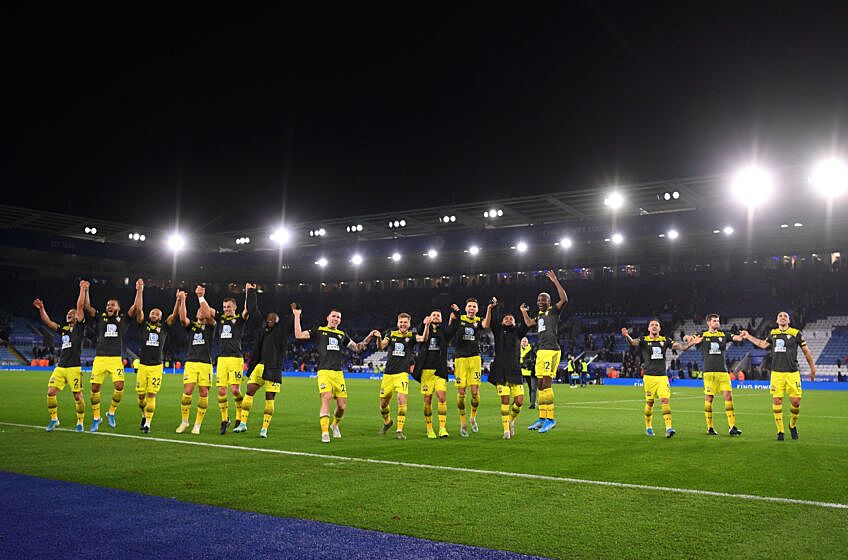 LEICESTER, ENGLAND – JANUARY 11: General view inside the stadium as players of Southampton celebrate with the fans following the Premier League match between Leicester City and Southampton FC at The King Power Stadium on January 11, 2020 in Leicester, United Kingdom. (Photo by Laurence Griffiths/Getty Images)

Redemption can often be a long and painful route for those who traverse it.

With much soul searching along the way, Southampton finally achieved redemption at the King Power stadium with a 2-1 victory, 11 weeks after that humiliating 9-0 defeat inflicted by Leicester at St Mary’s. To say this was a deserved win does not do justice to the tale.

Indeed only Liverpool have taken more points in the league than Southampton since that fateful night in October (source: BBC Sport) and the Saints team which prevailed yesterday was markedly different in demeanour, industry and effectiveness from the cowardly performance witnessed on 25th October 2019.

Southampton’s return of 20 points from a possible 36 tells a story in itself, especially in a wide open season where only Liverpool have played with any consistency. Since that chastening evening, Ralph Hasenhuttl has galvanised the players into a formidable outfit, led by the relentless Danny Ings up front and a secure base at the back. There have been setbacks along the way (West Ham and Everton at home spring to mind) but make no mistake, this is a team which have momentum and belief, that most powerful of cocktails in professional sport.

Stuart Armstrong’s deflected equaliser brought Southampton back into the game after Praet’s opener and the Scottish midfielder’s strike set the platform for a strong team performance which was uncompromising in terms of effort. Ings’ late winner was well deserved, a by-product of some lovely interplay involving Che Adams in the middle of the park. With Wolves and Palace looming on the horizon, Southampton have an opportunity to put daylight between them and the dogfight to avoid the dreaded drop.

Here’s what we can take away from the match at the King Power Stadium:

Next: Let’s hear some loving for Stephens and Cedric
Next1 of 4Prev post
Use your ← → (arrows) to browse
Load Comments
Event Tickets
Powered by StubHub