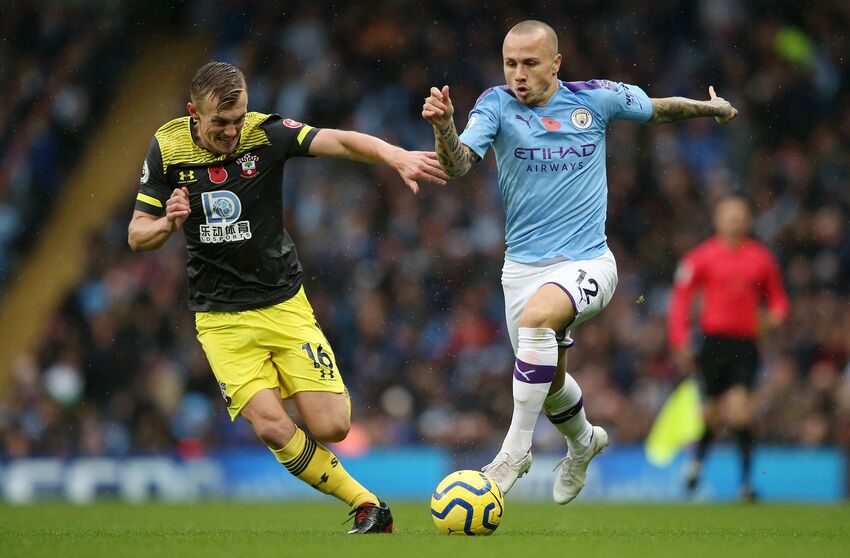 MANCHESTER, ENGLAND - NOVEMBER 02: Angelino of Manchester City battles for possession with James Ward-Prowse of Southampton during the Premier League match between Manchester City and Southampton FC at Etihad Stadium on November 02, 2019 in Manchester, United Kingdom. (Photo by Jan Kruger/Getty Images)

Southampton midfielder James Ward-Prowse backed the commitment of his teammates following their much-improved performance against Manchester City on Saturday.

In response to their embarrassing 9-0 loss to Leicester City, the Saints put in a showing that they can be proud of and defended valiantly for the majority of the match.

Ward-Prowse put the visitors to the Etihad Stadium ahead in the 13th minute, but goals from Sergio Aguero and Kyle Walker in the final 20 minutes of the contest saw City claim the three points.

Speaking to BBC Radio Solent after the game, Ward-Prowse said:

“You can’t question the lads’ commitment. I’m obviously with the team everyday, and know them very well – not only as footballers but as people. You can’t question our commitment even if we did lose 9-0 because everyone believes in what we’re doing and that night was just one of those nights. We came here Tuesday, we came here today and we’ve made stepping stones.”

"That has set the standard for going forward"

The England international has struggled to replicate some of the form that he showed in the second half of last season during this campaign and his place in the starting line-up each week has been questioned by Saints fans.

His stats in terms of distance covered cannot be disputed – he regularly runs the most of any player on the pitch when Saints play – but fans were concerned that he wasn’t contributing enough in an attacking sense.

Red hot form after the arrival of Ralph Hasenhuttl in 2018/19 saw him net six goals in nine games between January and March and Ward-Prowse will be hoping that his golden touch returns in the near future.

His comments about his teammates can be seen as positive – and their display certainly showed a good level of commitment and fight – but it obviously wouldn’t have been appropriate for him to say anything else.

Questions have been asked about the quality that Ralph Hasenhuttl has on offer and whether he really had the squad to get his ideas across fully, and this seems like the bigger issue.

The January transfer window looks like it could be vital for Saints depending on how much money there is to spend – and indeed the length to which transfers will be inflated when the new year comes around.

A crucial part of the rebuild will be the appointment of a new director of football operations, who the Telegraph say will be in place before the upcoming international break.

Next: Hasenhuttl on his side's reaction at Manchester City
Load Comments
Event Tickets
Powered by StubHub