DUBLIN, IRELAND - NOVEMBER 18: Pierre Emile Hojbjerg of Denmark celebrates with the fans after the UEFA Euro 2020 qualifier between Republic of Ireland and Denmark at Dublin Arena on November 18, 2019 in Dublin, . (Photo by Catherine Ivill/Getty Images)

Five Southampton players rounded off their November international action on Monday and Tuesday and were all unbeaten in the process.

All of the Saints players who have been away with their national sides will now return to the South Coast ahead of an important Premier League clash with Arsenal on Saturday afternoon.

Starting on Monday, Pierre-Emile Hojbjerg helped Denmark to secure their place at Euro 2020 with a 1-1 against the Republic of Ireland.

The Saints captain was brought on in the 13th minute to replace Borussia Dortmund man Thomas Delaney and saw Martin Braithwaite put his side 1-0 up with 15 minutes left to play.

Wolves defender Matt Doherty equalised five minutes from time, but that wasn’t enough to deny Denmark a place at next summer’s finals. 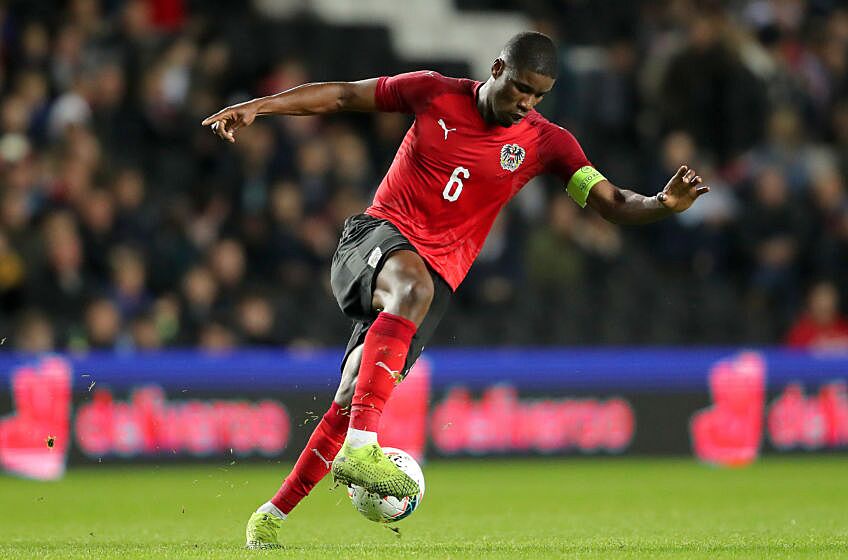 MILTON KEYNES, ENGLAND – OCTOBER 15: Kevin Danso of Austria controls the ball during the UEFA Under 21 Championship Qualifier between England and Austria at Stadium mk on October 15, 2019 in Milton Keynes, England. (Photo by James Chance/Getty Images)

The next international break in March could see Hojbjerg running out at Wembley after a friendly between England and Denmark was confirmed on Tuesday.

Kevin Danso also played on Monday and was the match-winner as Austria Under-21s claimed a 1-0 friendly win over Hungary Under-21s.

The Saints defender – on-loan from Augsburg for the season – headed in the only goal of the contest in the 44th minute and captained his side.

The friendly saw the Austria youngsters take a break from Under-21s Euro qualifying, but they remain in a strong position in their qualifying group ahead of their next competitive game against Andorra in March.

Jan Bednarek played the full 90 minutes for Poland once again as they secured an entertaining 3-2 win over Slovenia on Tuesday.

Sebastian Symanski opened the scoring for Poland – who are on their way to Euro 2020 next summer after a strong qualifying campaign – but Tim Matavz equalised for the visitors after just 14 minutes.

The lethal Robert Lewandowski regained the lead for the hosts after half time, Josip Ilicic made it 2-2 but Jacek Goralski got the winner with nine minutes left.

Stuart Armstrong and Sofiane Boufal were with Scotland and Morocco for Euro and Africa Cup of Nations qualifiers respectively on Tuesday.

Armstrong came on as a late substitute as Scotland beat Kazakhstan 3-1, whilst Boufal remained on the bench for a 3-0 victory over Burundi.